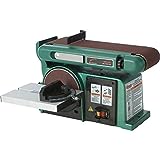 I had seen quite a few other makers on Instagram indicating they enjoyed this model and that was my biggest selling feature.  I’ve always had a higher opinion of a product that is praised by others, and this was no different.  My need, however, was simple, I needed a quicker way of sanding larger items such as cutting boards and glued up panels.

Sure, I could continue to use my orbital sander however that just takes way too much time and within one pass on the drum sander, all the glue is gone in seconds.  Call me sold. I purchased this drum sander in the Summer of 2016 and when it was first delivered I was quite shocked at the sheer weight of the device.

The pictures on the Grizzly site gave me the impression it was lighter than expected however what I should have read was the “approximate shipping weight: 300 lbs.” from the website.  Lesson learned. Also on that note and while we are on the topic I would HIGHLY recommend picking up the Heavy-Duty Mobile Base for this unit because as I am learning, moving this around is a pain in the ass.  To summarize this specific feature, it’s well built, sturdy and isn’t going to fall over.

Features on this drum sander that appealed to me were:

I have not used this sander enough to have gone through the change process, however, from the video, it looks simple enough.  The sander comes pre-loaded with 100-grit sandpaper which is decent however be warned it will leave some pretty good marks on your piece which will need to be sanded out via your orbital or another sanding device.  I will most likely up the grit to 120 so I’m not having to remove as many marks from the 100 grit today.

Again, I cannot stress this enough, ensure you get a mobile base if you have a smaller shop or want to move it around.  Without it you’ll be pulling on the base which is quite difficult to move around.

Michael Dunn is a 25 old Hobbyist Blogger and Columnist From San Jose, California. I have a Great Passion for Writing DIY Contributor and Home Improvement.